Opunake to Ecuador for BA grad and film-maker Film-maker David Cranstoun Welch has combined documentary-making in the US with studying for a BA by distance. 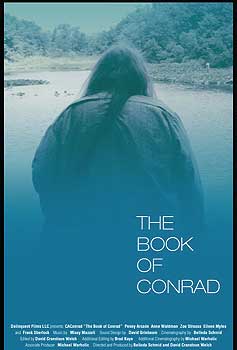 Poster for The Book of Conrad film 
From a campaign to ban single-use plastics in a Taranaki seaside settlement to large-scale deforestation in Ecuador – Los Angeles-based Kiwi David Cranstoun Welch has forged a path making stand-out documentaries while completing a Bachelor of Arts (BA).

He’s been studying at Massey University by distance from New York and Los Angeles, majoring in social anthropology – a field that fascinates him and that flows into his cinematic work.

The young director, writer, producer and editor recently moved to Los Angeles from New York where he’d been since 2008. Originally from Nelson, he decided to set himself up in New York because of the creative opportunities in the film world. Since then, he’s made a living producing video content for his current company, ONEder, and directed three feature-length films.

While his longer films have international themes, he’s also produced a short film about a New Zealand place he has never visited. The tiny coastal Taranaki town of Opunake was the focus of a collaborative online project he undertook with fellow BA students at Massey. One of the students, Kelly Langton, from Opunake, came up with the idea for level three core paper, Tu Tira Mai: Practising Engagement, which requires students to work in teams on a civic action project where they use research, problem-solving and ethical skills to address a social or humanitarian issue. The campaign succeeded in getting enough residents to sign a petition in support of local businesses ditching single-use plastics.

Prior to this, a crime story involving an unusual gay American poet was the subject of his most recent full-length documentary,The Book of Conrad. In it, he profiles the poet CAConrad and followed him as he investigated the murder of his partner in America's rural South. The film, which he co-directed with Belinda Schmid, premiered at the Thessaloniki Documentary Film Festival in Greece (one of the world's top 10 documentary festivals) and went on to screen at a variety of institutions throughout the United States, Europe and Scandinavia, including the Museum of Contemporary Art in Vienna, Austria. It was cited and reviewed in publications such as HyperAllergic, the Paris Review and the Huffington Post.

David, who will graduate later this year, discovered his subject by chance at a New Year’s Day Poetry Marathon in 2012 in Greenwich Village, Manhattan, describing his first encounter in a 2016 Stuff article: “There was one character who stood out above everyone else: CA Conrad. He was larger than life; close to 400 pounds, dressed in a large fur hat, with glitter nail polish, and an enormous crystal slung round his neck. His poetry was delivered in a loud, honking tenor that was immediately arresting. It was the work, however, that really grabbed us: stripped down and direct, but filled with brilliantly excessive, Rabelaisian humour.”

David began working with him on a short documentary, which developed into the feature-length film, The Book of Conrad. “We quickly found that, as a homosexual, living in America, Conrad's entire life had been shaped by violence: from the violence targeted against the community of drag queens he lived with in Philadelphia, to the suicide of his first boyfriend, in rural Pennsylvania. One boyfriend was even murdered, though the murder appeared to have been covered up by officials in back-water Tennessee (where the murder had occurred).

“The documentary took us on a journey across America, as we investigated the murder, interviewing the victim's twin, and local authorities, and followed Conrad's personal evolution, from outsider to celebrated writer.”

His latest project is a feature documentary, How Forests Think, based on the best-selling and paradigm-shifting ethnographic book: How Forests Think: Toward an Anthropology Beyond the Human by Eduardo Kohn (University of California Press). The film explores the climate change crisis through the lens of Kohn’s book, which deals with how the Runa people of Ecuador tried to stop mining by creating a treaty to protect the Amazonian rainforest. He is planning to go to Ecuador later this year for the shoot.

His website says the film will “explore the results of the treaty while providing a unique perspective on Dr Kohn’s ideas, his alternative world view and potential framework for audiences to see their connection to the wider planet.”

He came across Kohn's book while studying at Massey, and says that while it was not set as assigned reading it fitted his interest in structuralism."Primarily, my goal is to expose film audiences to an alternative view point; a new (or, in this case, old) lens that emphasizes connection, rather than division."

The project is still in pre-production, he says. “We have an exciting team, including a cinematographer who worked on the astonishing documentary Huicholes: The Last Peyote Guardians. The challenges will be many, one of the most difficult being my rudimentary Spanish.”

The background to the film is Ecuador’s constitution, re-written in 2008 to make it the first nation in the world to recognise the legally-enforceable rights of nature, alongside the 2017 granting of $1 billion in new mining rights that has decimated tracts of the Amazonian rain forest. The film is “an investigation of a people, and their fight against the devastating impact of deforestation,” David says.

Understand others and self through social anthropology

Social anthropology has provided a framework and a source of material for his creative projects.

“I was inspired by the American home decor company, Anthropologie. The real reason is that I am fascinated by customs and behaviours that differ from those I was raised with,” he says. “I believe it was [American sociologist] C.W. Mills who said that the task of the discipline to make the familiar strange and the strange familiar. Through that process you come to understand not only other cultures, but your own. You also come to better understand yourself.”

“I had always been interested in anthropology, starting with my early love of the folk music collecting of Francis Child, and Alan and John Lomax in the early 20th century, though quickly found that my ability to sight read wasn't up to par for ethnomusicology [at Auckland University], and decided to pursue a degree [at Massey], on weekends. Four years later and here I am!”

While it was challenging fitting in study around his life as a roaming film-maker, he says; “if I laid out a clear pace and schedule for myself, it was achievable. Life can often get in the way, so I decided that two courses a semester, and one course in the summer was right pace for me.”

He even met one of his lecturers, Dr Robyn Andrews, at the American Anthropological Association's annual conference in Washington, D.C. “She was a fantastically supportive professor who guided me through several courses. She enriched the online learning experience through regular, in-depth communication and through anecdotes and examples gleaned through her years of field experience.”

David has also shot, produced and directed two low-budget digital features in New Zealand, including the acid western “High Water Rising”, before relocating to New York City.  He has written for a variety of publications, including the UK’s Record Collector Magazine, CMJ, Perfect Sound Forever, and New York’s Jewish Voice.

For more information check out his two websites:

Opinion: Why universities can be just as good (and cost just as much) online

Video game loot boxes could be regulated under gambling laws